A Punkhouse in the Deep South Book Tour 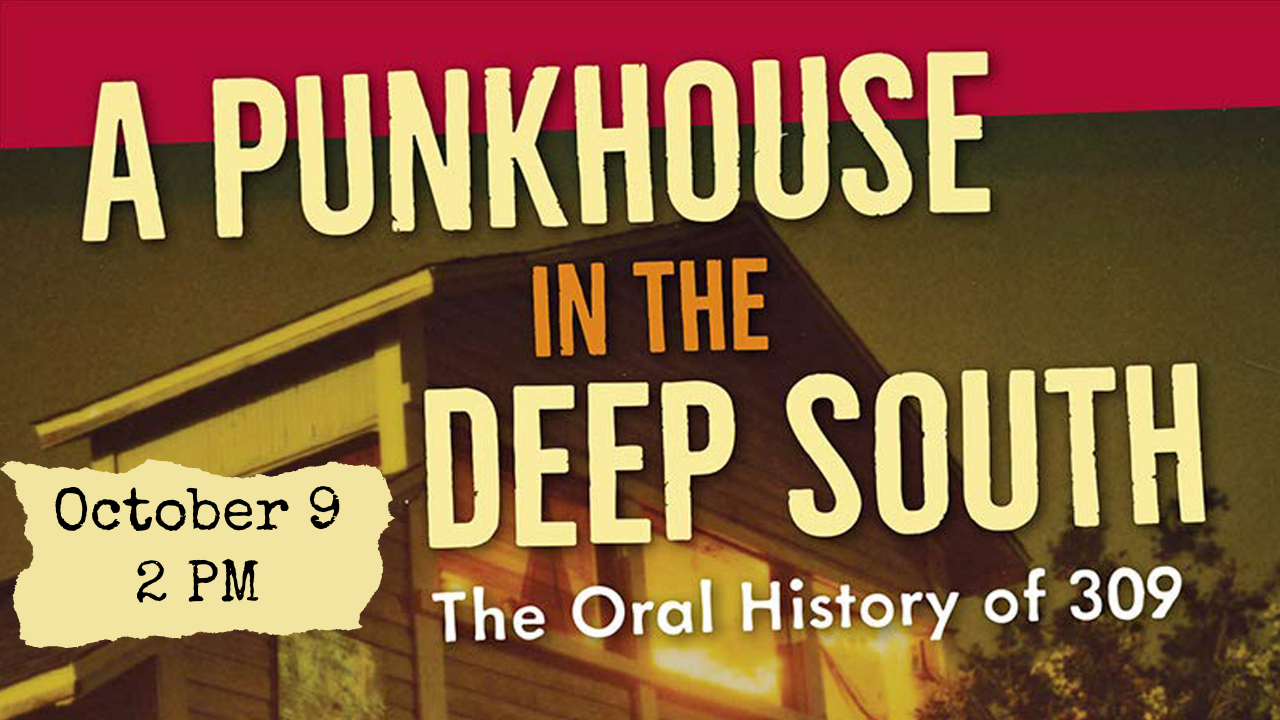 Join us at the Downtown Library on October 9 for a very special event: A Punkhouse in the Deep South: The Oral History of 309 Book Tour. Authors Aaron Cometbus and Scott Satterwhite will discuss the history of the famed “309 Punkhouse” in Pensacola, FL, while shedding light on the largely ignored lives of average punks, living in the oldest punkhouse in the South.

Books will be available for purchase after the talk.

What people are saying about the book:

”This beautifully crafted page-turner presents the outsider history of a thriving southern punkhouse where military brats, rocker chefs, queerdoe artists, revivified veterans, a newborn, and a rotating pack of dogs lived nearly cash-free in a filthy and vibrant wonderland they made imperfectly together:’-Anna Joy Springer, author of The Vicious Red Relic, Love

“A Punkhouse in the Deep South is a ray of light from a completely unexpected direction: a lucid, humble, sweet-natured account of building a small DIV utopia that would continue to flourish for more than 25 years in ostensibly hostile terrain. Its success may not be replicable, but that it happened at all is cause for wonder:’-Luc Sante, author of Low Life: Lures and Snares of Old New York

“The first punk oral history to illuminate a chronically undervalued context for southern misfit life: that it thrives because of its relationship to its community, not despite it:’-Nate Powell, artist of the March trilogy

“This book celebrates the punks who do the grunt work to build places where they can conspire to make a better way of life. It is an essential contribution to the history of music, counterculture, and cities:’-James Tracy, coauthor of Hillbilly Nationalists, Urban Race Rebels, and Black Power: Community Organizing in Radical Times

Told in personal interviews, A Punkhouse in the Deep South is the collective story of a punk community in an unlikely town and region, a hub of radical counterculture that drew artists and musicians from throughout the conservative South and earned national renown. Each voice adds to the picture of a lively community that worked together to provide for their own needs while making a positive, lasting impact on their surrounding area. Together, these participants show that punk is more than music and teenage rebellion. It is about alternatives to standard narratives of living, acceptance for the marginalized in a rapidly changing world, and building a sense of family from the ground up.

Including photos by Cynthia Connolly and Mike Brodie, A Punkhouse in the Deep South illuminates many individual lives and creative endeavors that found a home and thrived in one of the oldest continuously inhabited punkhouses in the United States.

Aaron Cometbus has been publishing the zine Cometbus since 1981. He is the author of many books, including Double Duce and I Wish There Was Something That I Could Quit. Scott Satterwhite is a historian, educator, and journalist who teaches writing and literature at the University of West Florida. Cometbus and Satterwhite are former residents of the 309 punkhouse.